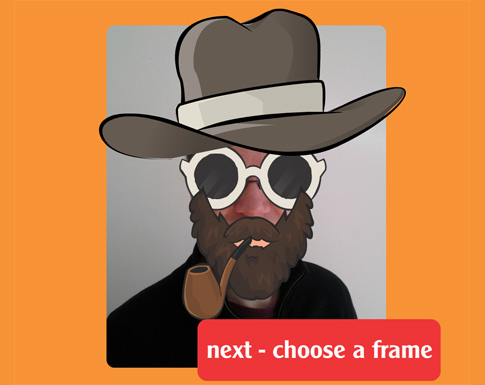 Create your own Horrible Disguise

The Imperial War Museum in London has just become a bit more horrible. Horrible Histories®: Spies brings the horrible history of Second World War spies and their secret schemes to life, based on Terry Deary’s book from the bestselling Horrible Histories series. We created a fun multi-screen exhibit which lets you take your picture and disguise yourself.

Once you’ve created your disguise it is displayed on a big screen for the world to see, or you can email it to yourself or post on Facebook. Philip Clevburger from the museum says “it’s coping really well, the kids love it”.

Chicken Feed! game released for iPhone, Android and the web 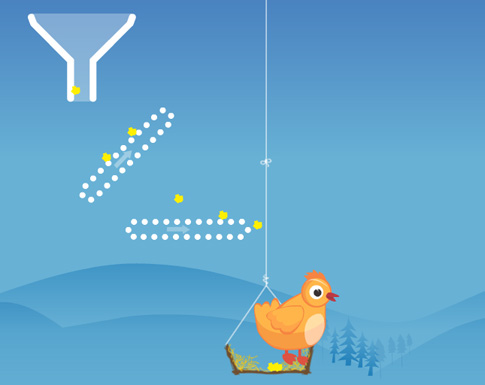 Feed the chicks so they grow up big and strong

We’re very excited to release our first mobile game for iPhone and Android phones. Chicken Feed! is a charming puzzle game where you use a selection of conveyor belts, fans, trampolines and other machines to feed chicks with grain.

Play on iPhone and iPad

Play on the web 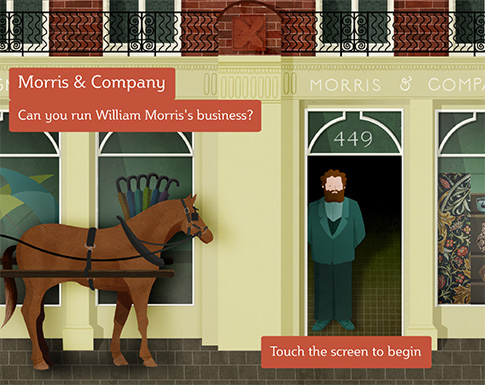 Can you run William Morris's business

We were delighted to be asked to create four interactive exhibits for the William Morris Gallery in Walthamstow, London. We created an exhibit where you run Morris’s design business, another where you can explore a map of Walthamstow and two information rich information points for a more detailed look. The end result is a stunning museum set in a newly refurbished park.We worked with Maraid who produced some lovely graphics and illustrations.

Extinct on Kongregate after a week

We tried an interesting experiment last week. We uploaded Extinct, our plant biology game to a games portal called Kongregate. Kongregate hosts all sorts of games but a lot of them are about wizards or shooting things. Extinct is based on the latest scientific research about how plants allocate resources so we weren’t sure how it would get on. Well we needn’t have worried, in the first week since we uploaded it, the game has been played over 150,000 times!

There’s also a lot of comments like “Awesome game”, “amazing potential”, “Nice, original concept.” and a lot of people who’ve finished the whole game for both plants and would like the game extended to last longer.
Kongregate is only one of many games portals and for future projects we’ll use them to increase the audience and impact of our games even more.

The Scottish Stem Cell Network wanted to tell more people about the new area of stem cell therapy. There’s a lot of research going on in Scotland in this field and the possibilities are very exciting. But how do you make the link between the complex cell biology and real medicine? We created three exhibits which give a gentle introduction to the subject but also deal with the issues and hard science. “Stem Cell Stories” uses the characters “Molly” and “Jim” to introduce the subject. In “Stem Cell Dilemma” you have to choose whether to trust internet clinics offering stem cell treatment. “Find Out More” gives you the depth of information that potential patients need. There’s a lot of interest in the exhibits and they’re going be installed in the Dundee Science Centre, The Glasgow Science centre and various science fairs. 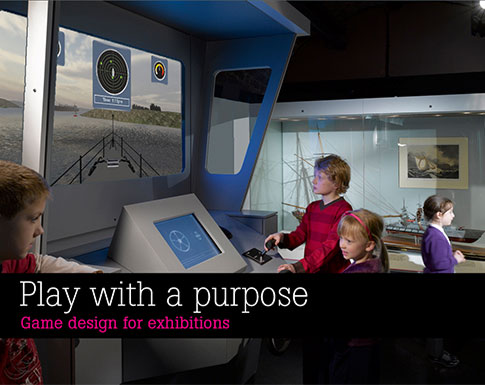 Last week Joe went to London to give an invited talk at a Museums Association event. The day was titled “Changing platforms: Creating effective digital content” and was held at the Royal College of Surgeons. To a full house of delegates from museums around the country he spoke about “Play with a Purpose: Designing games for exhibitions”. The talk included audience participation (thanks Anna!) and the origins of Monopoly as well as lots of useful advice. He enjoyed it immensely as well as seeing the other speakers who came from London’s top museums and those leading the field. 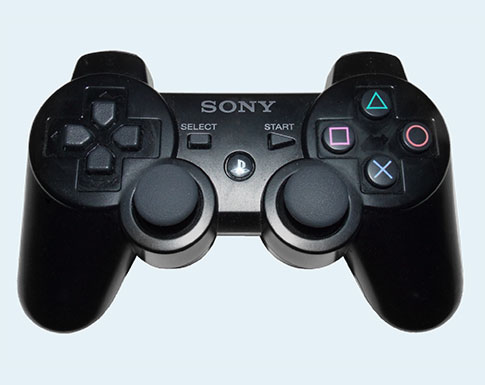 Last year I gave a talk at the Museums on the Web UK conference called Telling Stories with Games. I looked at how you can use games to tell stories in a museum setting and some of the issues to watch out for. It was a lot of fun but I didn’t really have enough time to cover everything I wanted to talk about.

I’ve finally got round to writing up the talk and managed to add in some new points and clarify a few more. Games are an underused resource for interpretation, but more and more museums are creating them. This essay gives you an outline of what you’ll need to consider to design a game to work in a exhibition environment. 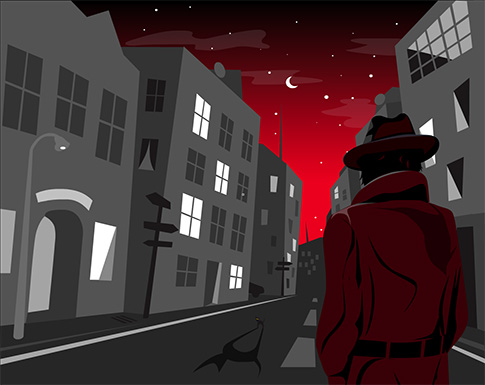 The Gene Therapy exhibit is inspired by dramas such as "Spooks"

We’ve just been down to the Science Museum in London for the opening of the new Who Am I gallery. The gallery covers modern biomedicine and we created two exhibits about genetics.

The exhibit manager told us “We’ve given you the really hard ones” but we’ve come up with two exhibits which give a gentle introduction to complex issues. Gene Therapy covers the treatment of Cystic Fibrosis using gene therapy. Inspired by spy dramas such as Spooks we created a sophisticated exhibit which uses short games to explain the gene therapy process. Patient of the Future looks at the use of genetic testing to decide who gets treated with which drug. It’s a more light hearted exhibit which visitors to the museum control using just two buttons.

Play Patient of the future
Comments Off
1st March 2010 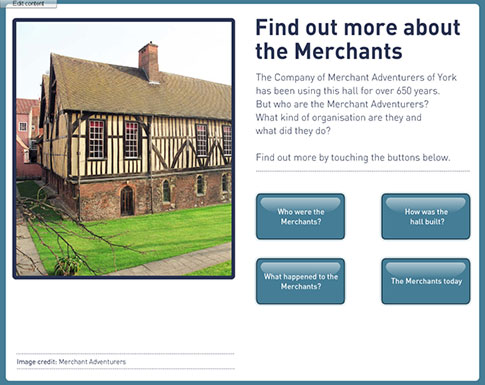 Exhibit kits let you edit any of the exhibit text easily

Since we released the first version of the exhibit kit software last year, we’ve had a lot of interest. The idea of being able to make your own simple touchscreen exhibits for nothing has been very exciting, particularly for those on a budget. There’s also been a lot of interest from galleries who need to be able to update their exhibits quickly and cheaply. And when we asked how easy to the kits were to use the reply came back – “ridiculously simple” .

Still, everything can be improved and we’re delighted to say that we’ve now released an update to the software which is now at version 1.1. The main improvements are with speed, particularly of loading and saving. There’s also a host of small improvements to things like the transitions and design. 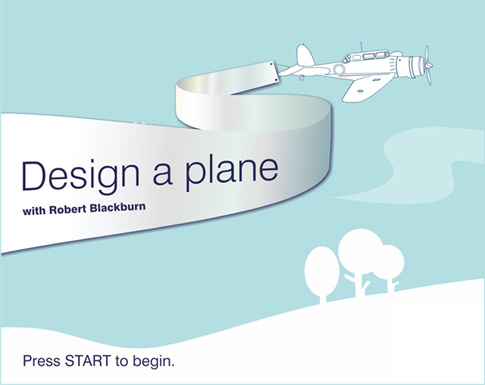 We’ve been pretty busy so haven’t been able to update this site as much as we’d like but we’re glad we’ve finally managed to get two new games up on the site. The first game Design a Plane lets you take the part of Robert Blackburn, a local air pioneer. You have to design three different aircraft and test them to see if they fly.  You’ll get the chance to find out what happens if you try and make a jet fighter out of wood! Take our word for it, the test flight probably won’t go well.

The other game is about the thrilling subject of industrial composting, mmm. However, we’ve isolated the most fun part of the process – driving the truck! You have to drive the truck which picks up the waste and take it to the right part of composting plant without crashing into anything. Poop, poop!